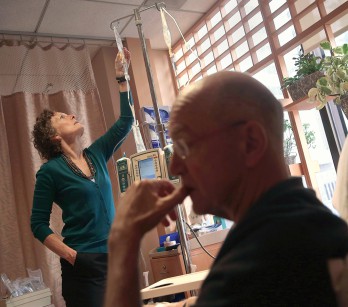 Assisted suicide advocates have pressed their cause in state legislatures this year, and now they’re trying to enlist the courts ALBANY, N.Y.—J.J. Hanson, 35, is a tall former Marine from New York’s Hudson Valley who did a tour in Iraq. He speaks so quickly and sharply that someone meeting him for the first time wouldn’t know that two years ago he couldn’t talk, walk, read, or write.

The loss of Hanson’s basic functions came shortly after a shattering diagnosis for a man with a wife and a young son. In 2014, out of the blue, Hanson had a seizure while he was at work. Doctors discovered he had stage 4 glioblastoma (GBM), one of the deadliest forms of brain cancer—and the same kind of cancer that assisted suicide advocate Brittany Maynard had when she ended her life in late 2014.

Three different doctors told Hanson his case was terminal and said he had four months to live. But he was determined to do aggressive treatment anyway. Doctors operated on his brain, which led to nine seizures in a day and his “cognitive loss” of basic functions. He joined a clinical trial. In order to recover from his cognitive loss, Hanson read children’s books, slowly working back up to adult reading.

Now he has survived two years—walking, talking, reading, and writing—and he is in what he calls remission, although he calmly admits that with GBM, there is really no such thing as remission.

Hanson, who worked in New York state government before turning to the private sector, had not given much thought to the issue of assisted suicide until he had a terminal disease. Now he is leading efforts against physician-assisted suicide legislation around the country with the organization Patients’ Rights Action Fund. New York is currently considering two bills to legalize the practice. California, Oregon, Vermont, and Washington have already made it legal.

Many people confuse physician-assisted suicide with the debate over keeping someone on a ventilator or feeding tube. Indeed, that’s partly due to proponents of assisted suicide, who characterize it as just another option in the menu of end-of-life palliative care. Physician-assisted suicide is in an entirely different category, allowing doctors to prescribe lethal drugs, which the patients then self-administer when they wish.

Opponents believe the laws will coerce the elderly, the poor, and the disabled who feel like economic and emotional burdens on their families to take these lethal drugs. The Netherlands, Belgium, and Switzerland allow assisted suicides for those with psychiatric problems, and a recent study in the journal JAMA Psychiatry showed that most of those obtaining the drugs in those countries were depressed and lonely.

‘That’s the strategy of the advocates. They’re going to try to chip away state by state. … There’s significant concern that the courts will lose sight of the limits of individual autonomy.’ —Ed Mechmann

Since Maynard so publicly ended her life in 2014, a number of states have considered legalizing the practice. Most bills have not passed—in Connecticut, Tennessee, Maryland, Colorado, Nevada, Wyoming, Utah, and Minnesota among others. California legalized the practice last year.
Assisted suicide advocates are trying to overturn state laws via the courts as well. The courts could be a faster track to legalization than the legislatures, perhaps following a similar path as the legalization of gay marriage that came through the U.S. Supreme Court in Obergefell v. Hodges. Backers of assisted suicide are basing their legal arguments on the same basic principle as in the gay marriage cases: individual rights and equal protection under the law.

This already happened in Canada. Last year the Canadian Supreme Court overturned the country’s ban on the practice. Last month, Liberal Prime Minister Justin Trudeau introduced legislation to legalize the practice formally. The legislation allows for assisted suicide of non-terminal patients, and also requires objecting doctors to refer their patients to another doctor who would prescribe the drugs. The Liberal Parliament will likely pass the legislation in the coming weeks.

The same process is underway in U.S. courts. The Montana Supreme Court legalized assisted suicide there in 2009. In New Mexico a lawsuit against the state ban on assisted suicide is ongoing. A state district judge initially ruled that the suicide ban violates individual rights “to choose aid in dying.” The state appeals court reversed that ruling last August, but assisted suicide advocates—led by the American Civil Liberties Union—appealed to the state Supreme Court.

And last year in New York, a group of terminally ill patients, a few doctors, and pro–assisted suicide group End of Life Choices filed a lawsuit against the state ban, on the grounds that it violates the equal protection clause of the state constitution. Ed Mechmann, a lawyer and the director of public policy for the archdiocese of New York, worked on the archdiocese’s amicus brief in the New York case.