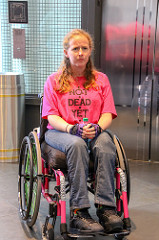 Stephanie Woodward is a graduate of Syracuse University College of Law and is the director of advocacy at the Center for Disability Rights in Rochester.

Having been born with a physical disability, I am all too familiar with the overwhelming number of people who feel that decisions should be made for me, not by me. I know the tactics used to coerce disabled people into doing what someone else thinks is best because they’ve been used on me. I am well aware of the “ableist” notions that society holds – that having a disability is a tragedy, that we’re a waste of resources and a burden on society, and that we’re “brave” to live with our disabilities (which essentially means that most people would rather die than be “brave” and live with a disability like me).

We’re often regarded as incapable of making our own decisions and unworthy of respect. However, when one disabled person announces they want to die, they’re lauded in the press and on social media. Sara Myers, for example, has Lou Gehrig’s disease and has received a slew of media attention for wanting assisted suicide because she began to experience disability. Media focused on Myers’s use of a wheelchair and her need for assistance in showering and toileting to demonstrate why assisted suicide should be available to her. For full disclosure, I use a wheelchair and have needed assistance with both showering and toileting in my life, and I expect I’ll need more assistance as I age. I take it very personally when media and society lists these as valid reasons to want to die.

With all of these negative stereotypes and stigmas against disabled people, combined with the praise a disabled person receives when they announce that they want to die, nothing scares me more than the legalization of assisted suicide. (David M. Rubin column, Oct. 30.)

Legalized assisted suicide has a disproportionate impact on disabled people. While everyone else receives suicide prevention, people with disabilities and certain illnesses and old people will receive a fast pass because our lives are viewed as less worthy.

Current legislation proposed in New York to legalize assisted suicide not only has no realistic way of protecting from mistake, coercion or abuse, but also lists no reporting requirements. This means that any doctor could prescribe a lethal dose and any person could administer that dose to kill a person, with medical confidentiality preventing any oversight. No independent witness is required during the death of an individual, so there’s no way to ensure that the individual administered the lethal dose himself or herself. In a world where abuse of people with disabilities and seniors is rampant, this alone is cause for concern.

Legalized assisted suicide has a disproportionate impact on disabled people.
For example, an adult child of an ill 80-year-old woman could accompany her mother to the doctor to obtain the lethal dose, and then administer it without her mother’s consent.

Kate Cheney, an 85-year-old woman with early dementia, was brought to her doctor by her daughter to obtain a prescription for the lethal dose in Oregon where assisted suicide is legal. The doctor refused to write the prescription. Unfortunately, that did not prevent Ms. Cheney’s death. Instead, Ms. Cheney’s managed care provider found a different doctor to prescribe the lethal dose. This second doctor had Ms. Cheney undergo a psychiatric exam and found that Ms. Cheney lacked the capacity to make this decision, so the lethal dose was, again, not prescribed. Cheney’s daughter became very angry and demanded that her mother undergo another evaluation. This psychologist deemed Cheney competent, but noted that Ms. Cheney’s “choices may be influenced by her family’s wishes and her daughter, Erika, may be somewhat coercive.” Soon thereafter Ms. Cheney took the lethal dose and died.

My concerns about assisted death are shared widely throughout the disability community. In fact, every major disability rights organization that has taken a stance on assisted suicide opposes its legalization. Our concerns extend further than abuse.

As I mentioned, disabled people frequently encounter members of society who believe that they know what is best for us. The medical community is one of the biggest offenders. The medical community has historically encouraged parents not to have or raise their disabled children, has prevented disabled people from reproducing by forcibly sterilizing us without our consent, and has forced us into nursing facilities and other institutions simply because of our disabilities. To have this community in charge of deciding who can access assisted suicide is incredibly troubling.

In recent years, plenty of medical professionals have deemed that assisted suicide is appropriate solely if a person is disabled. For example, according to the New England Journal of Medicine, most of Dr. Jack Kevorkian’s victims were not terminally ill, they simply had disabilities. Furthermore, the top reasons given for wanting assisted suicide are not pain or fear of future pain, but feeling like a “burden on others,” experiencing a “loss of autonomy,” or a “loss of dignity.” These factors are all disability related, as disabled people are often made to feel like burdens because we need assistance, which also contributes to the perceived loss of autonomy and dignity.

I, along with my allies in the disability community, urge all New Yorkers to understand that assisted suicide is not a “right” to be glorified, but a double standard that is lethal to communities that are already marginalized, oppressed and abused. We deserve the same suicide prevention that nondisabled people enjoy, because despite the widespread belief otherwise, I assure you, our lives are worth living.